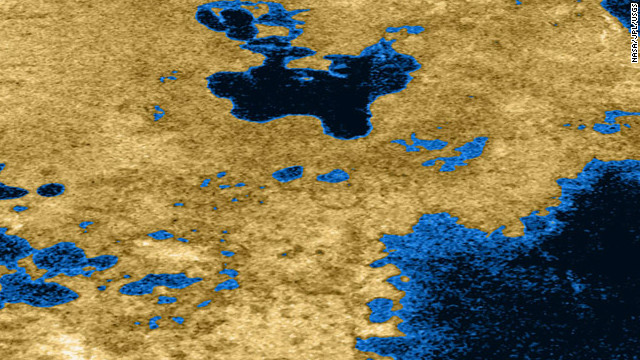 Probe would set sail on a Saturn moon

While the rover Curiosity is driving almost flawlessly on Mars, scientists are proposing another exciting possibility for extraterrestrial exploration: a probe that would sail across a lake on Saturn's largest moon, Titan.

TALISE is a boat probe that would navigate Ligeia Mare, a large lake on Titan, making extensive scientific analyses during the journey. Scientists involved say the mission would be broken up into three phases and last six months to a year.

“The principle objective shall be to characterize Titan’s environment, lakes and its terrain’s chemical composition, rich in hydrocarbons and nitrogen,” the scientists wrote in an abstract presented at the European Planetary Science Congress in September.

For now, it's just a concept. And it would not be the first attempt to explore Titan. In the 2000s, NASA’s Cassini-Huygens mission found many bodies of liquid hydrocarbons (similar to household gases) on the moon and possibly a layer of liquid water under its shell.

TALISE will pick up where Cassini-Huygens left off. The major difference would be an advanced propulsion system to make it stay afloat longer, allowing it to gather more information. Scientists have thought about several options for accomplishing this, including paddle wheels, inflatable wheels, tank wheels, and air or liquid propeller.

“The main innovation in TALISE is the propulsion system,” Igone Urdampilleta, a member of the TALISE team, said in a statement in September. “This allows the probe to move under control from the landing site in the lake to the closest shore.”

Most fascination associated with Titan comes from its Earth-like features. Its organic chemistry, thick atmosphere and vast rivers may provide evidence about the beginnings of life because it mirrors what Earth looked like billions of years ago, before humanity began breathing oxygen. But it's too cold for life to exist now - at least, life that subsists under conditions we know on Earth.

If the TALISE mission is approved, it will be the first to analyze liquid across Titan’s large northern region. The mission also plans to study terrain surrounding Ligeia Mare.

“It will open the doors for a new generation of small landers with longer lifetimes, cost-effective and equipped with state-of-the-art in-situ (in-place) instrumentation,” Urdampilleta said.