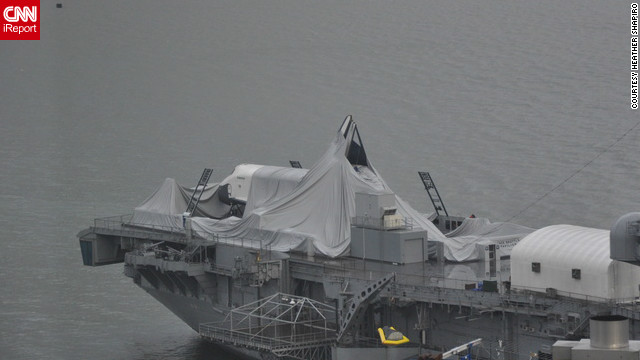 Heather Shapiro took this photo of the space shuttle Enterprise from the window of her 21st floor apartment on Tuesday morning.
October 30th, 2012
11:19 AM ET

In the midst of flooding, power outages and significant damages in New York City as a result of Hurricane Sandy, the space shuttle Enterprise appears to have been uncovered.

CNN iReporter Heather Shapiro, 28, snapped a photo of Enterprise from the window of her New York apartment building on Tuesday morning. She lives on the 21st floor.

Normally, the shuttle is shielded by a dome-like tent at the Intrepid Air, Sea and Space Museum. This tent, which Shapiro described as a "giant gray bubble," appears to have collapsed, with the fabric draped over the shuttle.

Mashable reports, "Despite the loss of the protective structure, the Enterprise looks to be mostly fine, save some possible damage to the vertical stabilizer."

The rise in the Hudson River due to Hurricane Sandy caused flooding and damage to Pier 86. The pier was designed to withstand the 100 year storm. However, the unprecedented levels of water flooded the main electrical transformers and both of our backup generators.

As a result, power issues caused the Space Shuttle Pavilion to deflate. We currently are assessing the situation. The safety of our employees is most important, and when our teams are able to safely work on site, we will begin to rebuild the areas of our complex that have been affected. We are eager to reopen our doors to the public, but as of now, the Museum will be closed until further notice. Please visit www.intrepidmuseum.org for updates. We appreciate your patience and support.