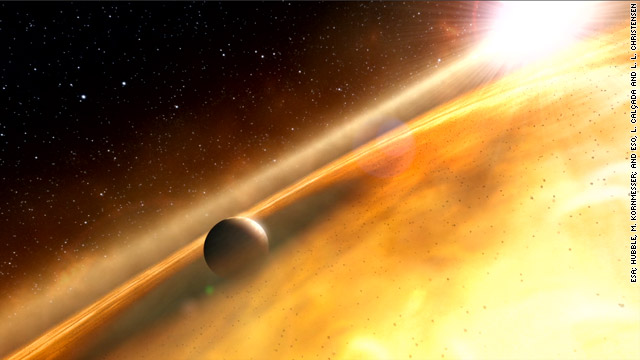 Recent studies have taken away Fomalhaut b’s title of the first directly imaged exoplanet, and also questioned its existence. Given the varying brightness of the possible exoplanet cited in the original findings, and the inability of NASA’s Spitzer Space Telescope to find the planet in the infrared range of the electromagnetic spectrum, it was concluded that Fomalhaut b was just an apparition caused by a large clump of dust inside the star’s dusty ring.

Now, thanks to a team poring through old Hubble data, Fomalhaut b has been brought back to life. Thayne Currie, an astronomer from the University of Toronto working on the data, says that while his team's findings are different, Fomalhaut b could very likely exist.

Currie and his team went back through old Hubble data from 2004 and 2006, and found evidence of the planet again. This time, they called into question the earlier discovery’s report of variable brightness. Currie's team was unable to find the exoplanet using the Subaru Telescope in Hawaii; they claim that this also suggests that the planet is smaller than was originally speculated (two times Jupiter’s mass, at the most, and possibly as small as Neptune).

"Although our results seriously challenge the original discovery paper, they do so in a way that actually makes the object's interpretation much cleaner and leaves intact the core conclusion, that Fomalhaut b is indeed a massive planet," said Currie in a statement.

Currie told CNN Light Years that the hunt for exoplanets is still tricky, but the vast array of methods provides their own system of checks and balances.

Astronomers usually use alternate techniques to find planets: They measure radial velocity (a star's wobble as a planet orbits), or they look for the transit of the planet causing an apparent dip in its host star's luminosity.

Said Currie, “...No exoplanet detection method is foolproof. The methods we used to reimage Fomalhaut b and those used to image some planets...rely on very powerful but complex image processing programs to remove the noisy halo of light from the star to see the planets. It is possible, in some cases, for these programs to imperfectly remove the noise structure in such a way that what is left looks very much like a planet and is a false detection."

“...In the case of Fomalhaut b, we also imaged it using more simple, less powerful but easier to understand methods. Finally, different, competing groups have their own programs. So these different groups provide a check on one another's claims of a planet detection. For Fomalhaut b, multiple groups get detections.”

Currie went on to say that while their study is proof that something is there, and that it is likely an exoplanet, the question of its true nature will remain a mystery for the time being.

Currie hopes that NASA’s James Webb Space Telescope (JWST), which has struggled with funding over the years, will clear up some of the mystery surrounding Fomalhuat b when it is eventually launched.

“JWST will be able to image planets at exactly the wavelengths where light from a planet's atmosphere is easiest to see. If there is a Jupiter-like planet at the location of Fomalhaut b, JWST will likely detect the light from its atmosphere. This is the kind of puzzle that probably only JWST can solve.”

Currie added, "Astronomers will be arguing about Fomalhaut b for a long time.”

To announce the findings, which will be published in The Astrophysical Journal Letters, NASA Astrophysics made a spooky Halloween themed video. Check it out below.