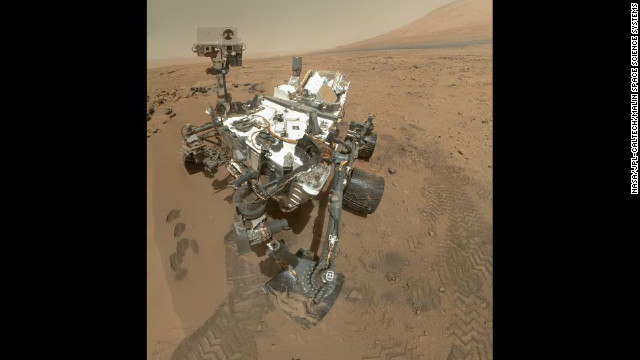 Drumroll please. The results are in.

The rover Curiosity, equipped with the most sophisticated tools ever sent to the Red Planet, has returned the initial measurements of the composition of the Martian atmosphere. And they are ...

Chris Webster of the NASA Jet Propulsion Laboratory in Pasadena, California, is the instrument lead for SAM Tunable Laser Spectrometer. He promised attendees of Friday's press call that he would answer the question eventually.

But the bombshell was delivered in one sentence: "We have no definitive detection of methane."

This is perhaps a disappointment for anyone who thought signs of life would come this early in Curiosity's two-year mission. Curiosity is using the Sample Analysis at Mars instrument (SAM) to help scientists probe the atmosphere.

Methane gas could be a key indicator of the planet's habitability. About 90% to 95% of the methane in Earth's atmosphere is biologically derived, said Sushil Atreya, a University of Michigan researcher and co-investigator for SAM.

"It’s not really a surprise to us. We went there with no preconceived notions of what we were going to find," Atreya said.

Even if there were methane, however, the gas can be produced by nonbiological sources, such as volcanic activity.

The story isn't over. Curiosity landed on August 6, so it has time to take samples and come up with a more conclusive estimate for the amount of methane in the Martian atmosphere. The scientists took into account relatively large margins of error for the analysis.

If there is a source of methane, it takes about three months to distribute it from the source, scientists said. Curiosity will continue making atmospheric measurements and may find methane in the future.

"We’re going to keep looking in the months ahead," Webster said. "Mars, as we know, may yet hold surprises for us."

Twitter was buzzing with the news. @SarcasticRover tweeted, "So far Mars has no methane. It also has no lemurs or apples. Also lacking in homemade soups. It's a pretty empty planet."

An analysis of the isotopes in the Martian atmosphere reveals that a portion of the atmosphere may have been lost to space.

Scientists theorized this based on the presence of heavier isotopes of carbon in the atmosphere's carbon dioxide compared with the ratio of heavier to lighter isotopes estimated to have existed when the planet formed.

So what happened to the gases? There are several possibilities, says Laurie Leshin, researcher at Rensselaer Polytechnic Institute and co-investigator for the SAM instrument. For example, large impacts can blow off large parts of the atmosphere, Leshin said. There's no protective magnetic field around the planet, either, so solar wind ions can knock things off, she said.

NASA's next step for the Red Planet - the Mars Evolution and Volatile Evolution Mission, aka MAVEN - will try to understand those mechanisms in more detail by examining the gases escaping from Mars today, Leshin said. MAVEN will involve an orbiting space probe, which is scheduled to launch November 2013.

The five gases most prevalent in the Martian atmosphere are carbon dioxide, argon, nitrogen, oxygen and carbon monoxide, scientists found.

In general, the results are consistent with what the Viking mission found in the 1970s, except that Curiosity found a 35% lower atmospheric abundance of nitrogen. Atreya said it's possible that the proportion of nitrogen in the atmosphere could change seasonally; there just isn't any information on that yet.

With more measurements over time, the latest and greatest rover may provide further insight into whether that's true year-round and what it means.

More: What's we've done on Mars and what's next