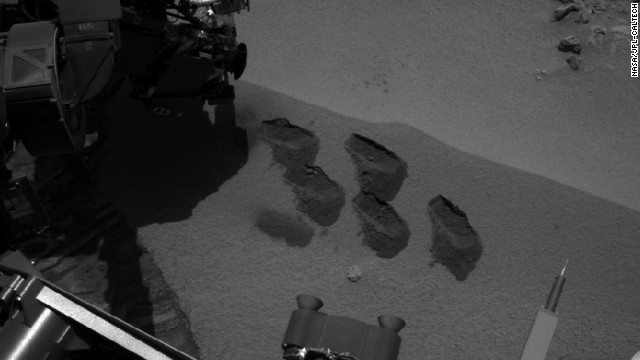 Characterizing the radiation on the surface of another planet has never been done before now, Hassler said.

Over time, researchers will get all of those radiation numbers to create a better assessment of exactly how much radiation a person would experience during a Martian journey, Hassler said.

Since Curiosity arrived via some jaw-dropping landing maneuvers on August 6, the rover has not seen any large solar flare or solar particle event, Hassler said. But it did detect some of those while en route to Mars.

It appears that the radiation measurements are a factor of 2 less than during the trip, which isn’t surprising, given that the planet’s atmosphere offers some protection, Hassler said. When a solar particle event does occur, that will tell researchers more about spikes in radiation that astronauts might experience.

It’s important to understand how much radiation is hitting the planet in order to get more insight into Mars’ habitability – past, present and future.

“We’re finding that the Mars atmosphere is acting as a shield for the radiation on the surface," Hassler said. "And as the atmosphere gets thicker, that provides more a shield, and therefore we see more of a dip in our radiation dose.”

Of course, Mars does not shield its surface from radiation the way that Earth does. Mars appears to have lost its global magnetic field 3.5 billion years ago, whereas Earth still has one. And the atmosphere of Mars is about 1% the thickness of atmosphere on Earth.

This is just the beginning of taking these measurements, says Hassler.

Scientists are also using Curiosity to measure the wind and weather on Mars. Right now, the area where the rover is in springtime. Temperatures will get warmer in the next few months as the planet gets closer to the sun; this is a factor in determining the season on Mars, said Ashwin Vasavada, Deputy Project Scientist for Mars Science Laboratory at NASA’s Jet Propulsion Laboratory.

Curiosity is parked in an area called Rocknest, where it has taken several scoops of soil. These scoops help to clean out its instruments, and some of them got analyzed for their mineralogy. The first scoop was on October 7.

No methane or homemade soups on Mars have been found, yet

Curiosity may start moving again in a few days, the scientists said.

NASA scientists worked on Mars time for the first 90 Martian days of the mission, but have transitioned back to Earth time so that they can go home and see their families again, Vasavada said. The Earth schedule is “for psychological reasons mainly.”

More: What we've done on Mars, and what's next