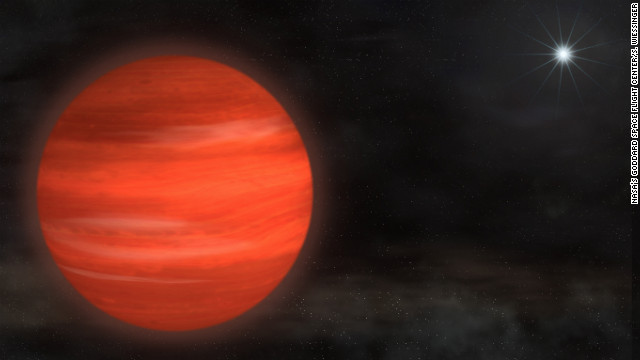 Scientists have discovered what could be a massive planet outside our solar system, NASA said Monday.

Astronomers used infrared data from the Subaru Telescope in Hawaii to identify Kappa Andromedae b, a "super-Jupiter" object that appears to be nearly 13 times the mass of Jupiter.

The planet orbits a star called Kappa Andromedae. It's not entirely certain whether Kappa Andromedae b is a planet, however, NASA said. If it can generate energy by fusion, it would be considered a "brown dwarf" star.

Fusion is the process by which atomic nuclei combine, releasing a huge amount of energy. The sun produces energy by fusing the common form of hydrogen into helium. But a brown dwarf fuses deuterium, a heavier form of hydrogen gas. Brown dwarf stars are dimmer and cooler than other stars, but purely in the temperature sense; they have also been called "failed stars."

Planets do not produce energy through fusion. However, planets do emit heat that is left over from their own formation.

The discovery sets a record for Kappa Andromedae, the host star. It is now the most massive star to host a planet that has been directly imaged, or to have a lightweight brown dwarf companion.

The research comes from a five-year effort called the Strategic Explorations of Exoplanets and Disks with Subaru (SEEDS).

You can see the star Kappa Andromedae without a telescope; it is in the direction of the nearby constellation Andromeda. But you won't be visiting any time soon, since the star is 170 light years away.

Slate blogger Phil Plait emphasizes that this discovery is exciting because although scientists have detected more than 850 planets beyond our solar system, few of them have been directly detected. In other words, it's not often that we can get an image with light coming from them - here's a gallery of the ones we know about.