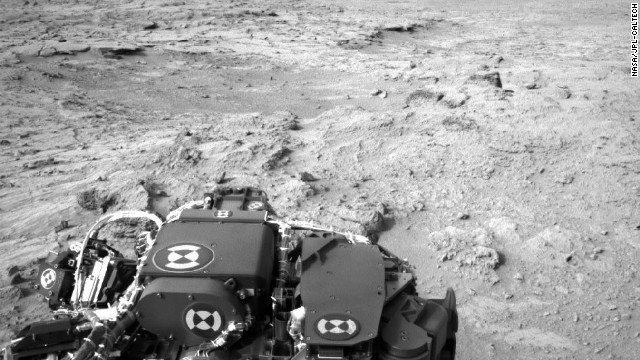 A big "OMG" moment for space enthusiasts may be coming!

We were certainly excited to read on NPR's website that the Curiosity rover may have discovered something "really interesting." John Grotzinger, principal investigator for the Curiosity rover mission, revealed to NPR that "This data is gonna be one for the history books. It's looking really good."

The data in question come from soil that was analyzed by an instrument suite on the rover called SAM, the Sample Analysis at Mars. This chemistry set is equipped to look for compounds of carbon, such as methane, as well as hydrogen, oxygen and nitrogen. These would suggest at least the possibility that life could have once existed there.

But Grotzinger would not tell NPR exactly what about the latest results could be so "earthshaking" (should we say "Mars-shaking"?). And it will be several weeks before the public may know anything further about the matter, NPR reported. The scientists don't want to say anything prematurely, before they're sure they know what they're seeing.

NASA-Jet Propulsion Laboratory spokesman Guy Webster told CNN that the science team is not ready to discuss the soil inspection from SAM and that the same policy applied to past results from the Curiosity mission.

"The scientists want to gain confidence in the findings before taking them outside of the science team. As for history books, the whole mission is for the history books," he wrote in an e-mail. "John was excited about the quality and range of information coming in from SAM during the day a reporter happened to be sitting in John's office last week. He has been similarly excited by results at other points during the mission so far."

Curiosity has been roaming Mars since its spectacular landing August 6, which involved a supersonic parachute and a sky crane. It weighs nearly 2,000 pounds and has 17 cameras on board. With the rover's sophisticated instruments, the $2.5 billion mission is exploring Mars in ways that no manmade probe has ever been able to before.

The rover landed in a place called Gale Crater, which may have once contained water. In fact, during its first couple of months of exploration, Curiosity found evidence of ancient water, based on rock formations that appeared to have formed in the presence of water.

For several weeks, Curiosity was parked at a place called Rocknest, where it scooped up soil samples and discovered shiny objects.

On November 16, the rover started driving again, NASA said. Currently it's on its way to a location called Point Lake. It moved 83 feet eastward Sunday.

Meanwhile, space fans have taken to Twitter to post humorous speculations about the rover's discoveries using the hashtag #CuriosityFindings. @treelobsters writes, "That red dust? Actually paprika." @jkfecke adds, "Face on Mars is huge statue of Justin Bieber." And particularly groundbreaking would be, as @TechyDad writes, "A giant pile of unmatched socks that disappeared from the Earth's washing machines."