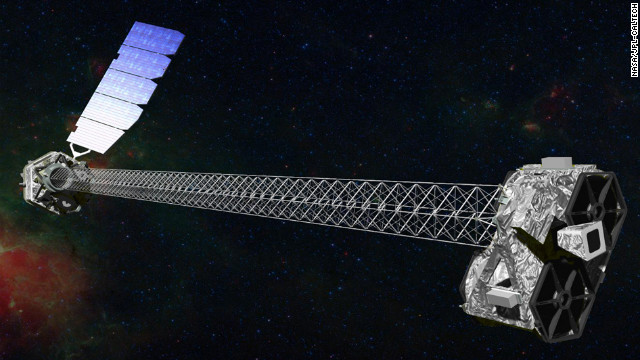 This is an artist's concept of NASA's NuSTAR spacecraft, which can study radiation from snacking black holes.
November 27th, 2012
02:56 PM ET

Massive black hole gets a snack

A new NASA spacecraft captured an image of a giant black hole in the center of the Milky Way galaxy having a snack. And by "snack," we mean matter that happened to fall close enough to it to be sucked in by the black hole's tremendous gravitational pull.

"NuSTAR picked up X-rays emitted by matter being heated up to about 100 million degrees Celsius," said NASA in a statement. This high-energy radiation is what NuSTAR, an orbiting observatory, picked up.

“We got lucky and captured an outburst from the black hole during our first observing campaign,” Fiona Harrison, the mission's principal investigator at the California Institute of Technology, said in a NASA statement.

This observation is important because scientists want to know why the black hole in the center of the Milky Way is relatively quiet; we don't know that it eats a whole lot. Other black holes eat up a lot more matter. It's possible that our black hole is eating primarily asteroids, and small space rocks, but more research is needed to make firm conclusions.

Musk’s vision is to take thousands of people on a trip to Mars, aboard a reusable rocket powered by liquid oxygen and methane. This would be an opportunity for people to build transparent domes so that Earth crops could grow on the Red Planet. The colonists would bring equipment to produce fertilizer, methane and oxygen while in space.

At a ticket price of $500,000, the Mars Settlement Program would consist of up to 80,000 people starting with a group of 10 people or less per trip to explore the Red Planet.

Musk hopes to transport more people and less equipment in the future if the Mars Colony is successful.

A year long space station mission is set for 2015

NASA and Roscosmos have appointed veteran astronaut Scott Kelly and veteran cosmonaut Mikhail Kornienko to undertake a year-long mission aboard the international space station in 2015. This marks the longest stay in space ever for an American, CNN reports.

“The one-year increment will expand the bounds of how we live and work in space,” William Gerstenmaier, associate administrator for Human Exploration and Operations said in a statement.