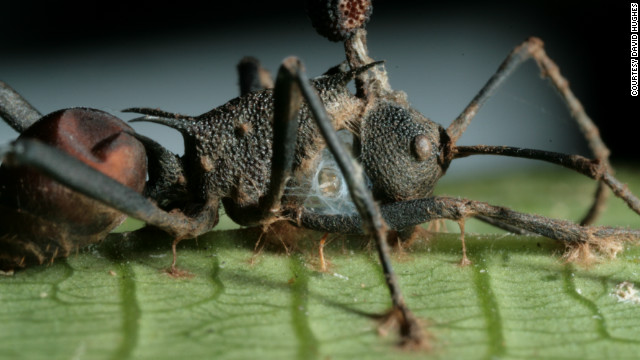 Zombies are everywhere, from hit TV shows like "The Walking Dead" to films like the upcoming "Warm Bodies." We seem fascinated by these ghastly creatures who are infected with an unknown disease that compels them to gurgle or groan and lust after brains.

These zombies are, of course, fictional. But the idea that a parasite can infect and control animals is real. There are several examples in nature where parasites manipulate host behavior to further their own reproductive goals. It's fascinating to think about how, when one organism invades another, the host can lose power over its own movements and behaviors.

He points out that half of all of life on Earth is parasitic, but it’s rare for the parasite to be able to take the steering wheel inside its host. Often, parasites just lead to sickness – like malaria in humans – or annoying bites, as with bedbugs.

“Every single organism that we look at has its own parasite, but only a small proportion of them have evolved this cruel trick of manipulating the behavior of the host that they’re infecting,” he said.

Parasites can live in the brain or muscle tissues and can lead to some crazy behaviors.

One source of parasites that Hughes studies is called Ophiocordyceps, a group of fungi. The spores that the fungus releases attach to the skin of carpenter ants, which Hughes and colleagues observed in Thailand. It takes about 12 to 18 hours for the fungal spore to grow into an ant’s skin.

You should first know a little something about ants: There’s a queen who does all the egg-laying and other females, called workers, who collect resources for the colony. As one of these workers is walking through the forest, she can contract fungal spores that infect her and ultimately control her behavior.

As a result of the fungus, the ant leaves the nest and has convulsive behaviors. She may be “walking randomly around the forest for a couple of hours,” Hughes said.

And then, the ant will go to the underside of a leaf, bite into the veins and hang upside down to die for about six hours. "The fungus makes them hold on (to the leaf) even after they’re dead,” Hughes said. From the head of the ant corpse sprouts more fungus, which emits spores, infecting more ants.

Hughes and colleagues also observed this phenomenon in Brazil.

Check out this video about Hughes' research from Penn State:

Lest you think this is the beginning of a new zombie invasion, Hughes and colleagues have found evidence of this happening in ants about 48 million years ago in Germany. The process has survived many generations.

This isn’t the only instance of parasites manipulating their hosts’ behavior. Gordian worms, also called horsehair worms, can live in crickets’ bodies for a long time.

Here's a demonstration from VB Films:

These parasites cause changes in protein expressions in the brain that make the cricket quite thirsty. The cricket, possessed, heads to a pool of water where it dies, but the worm exits to mate with other members of its species.

Rats also exhibit self-destructive behaviors when invaded by parasites. Toxoplasma makes rats lose their fear of cats, so they may not run away when a cat tries to eat them. That’s what the parasite wants: for the cat to eat the rat so that Toxoplasma can pass into the cat, too.

Even we humans may not be immune to the behavioral influences of parasites. Toxoplasma also infects humans, at much higher rates in some countries than others, and some researchers are looking into whether that could affect personality.

According to the Centers for Disease Control and Prevention, more than 60 million Americans are carrying the Toxoplasma parasite. In most people, there are no symptoms because the human immune system usually stops the parasite from causing illness.

But Toxoplasma infection can create problems in a small number of cases, especially in pregnant women - who can pass the parasitic infection to their children, causing blindness or mental disabilities later in life - or people with compromised immune systems. Cats can play a role in the transmission of Toxoplasma through feces. That's why those people are advised to keep their cats indoors and to avoid changing cat litter and touching stray cats.

This parasite may be affecting us in ways we do not realize. Kevin Lafferty of the University of California, Santa Barbara, has done some highly controversial work suggesting that certain cultural-personality traits such as neuroticism may be correlated with levels of Toxoplasma gondii. He suggest that countries with higher infection levels may be more likely to have stronger "masculine sex roles" in their societies, insofar as they "reinforce traditional gender work roles, gender differentiation, and have a higher focus on ego, ambition, money, material possessions, self-achievement and work than on relationships, people, social support and quality of life."

Science writer Ed Yong also postulates that there could be some interaction with climate. Toxoplasma gondii eggs have a longer lifespan in “humid, low regions.” Parasites, climate and culture may all interrelate.

Of course, just because there are associations between the parasite and behavioral traits does not mean that one causes the other. Obviously, a lot of factors influence human cultural patterns.

If there is any credence to the notion that parasites are influencing culture, that would mean many of us are, in some sense, part zombie.

Regardless, it’s fascinating to think that the creepy mind-control stuff of the movies is actually happening to some extent in nature, even in the unsuspecting world of ants.