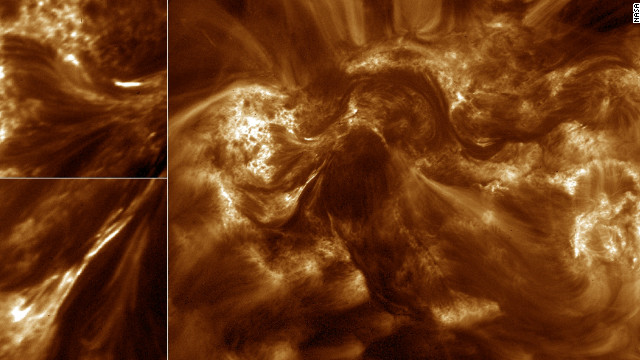 A NASA telescope called the High-resolution Coronal Imager (Hi-C) has taken images of the sun's corona with unprecedented resolution, letting scientists take a closer look than ever at the atmosphere of our nearest star. To give you a sense of how good these images are, the resolution is equivalent to resolving a dime from 10 miles away, NASA said.

The result are dozens of high-resolution images that give scientists a "glimpse" of the energy release and storage system in the sun's atmosphere, said Jonathan Cirtain, an astrophysicist at NASA's Marshall Space Flight Center, in a press conference Wednesday.

In a study published in the journal Nature, Cirtain and colleagues describe magnetic "braids" in the sun's corona, which could help explain its unusual heat. In other words, twisting and intersecting magnetic field lines move gas around in the corona, generating energy that raises the temperature.

This transfer of energy from the magnetic field of the sun to the corona had been previously thought about, but never observed.

"The dynamic behaviour of the observed structures is interpreted as evidence for ‘magnetic braiding’, an effect in which small bundles of magnetic field become wrapped around each other owing to plasma motions at the solar surface," writes Peter Cargill of Imperial College London, who was not involved in the study, in an accompanying article in Nature.

Check out this video from Nature for a clearer visualization:

Scientists obtained a large amount of data from the telescope in only about five minutes of observation. The mission cost $5 million, including the cost of launching the rocket that carried Hi-C, said Jeff Newmark, scientist with NASA's Sounding Rocket program.

The sun rotates in a 27-day cycle, and its atmosphere with it. As it spins, the atmosphere is constantly changing in an apparently gradual way, said Karel Schrijver, senior fellow at Lockheed Martin Advanced Technology Center in Palo Alto, California, at Wednesday's press conference.

But when you look closer, with an instrument such as Hi-C, it appears that there are smaller changes and jumps that are responsible for changes in the whole corona, he said. When that process stalls, the extra stress that builds, and eventual relaxation that happens, produce solar flares and coronal mass ejections.

"Those larger explosions and eruptions are what drive space weather around all the planets including, of course, Earth," Schrijver said.

Still, the current findings cannot answer the question of why this process leads to coronal mass ejections sometimes but not others, the scientists said. It's necessary to view structures of the sun at both small and large scales to begin to tackle it, Cirtain said.

"We know where the energy is," Schrijver said. "We don’t know why at any given time it’s released, or gets stuck in this."

The telescope observed flares on the small scale as hot as 7 million degrees, which is the instrument's limit of measurement, Cirtain said.

It's important to study the sun because large solar storms have the potential to damage the power grid and navigation systems, Schrijver said.

Learning about the sun can also teach us about the processes that occur in other stars much further away, Schrijver said. "We need to look at our sun for clues as to what is going on elsewhere in the galaxy," he said.