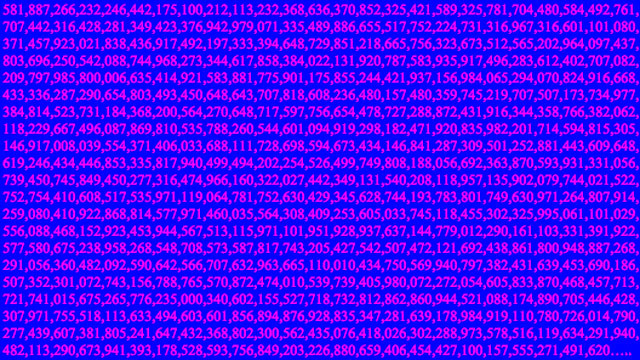 You know you're a geek if you felt all warm and fuzzy inside when you read that headline. If you got here by accident, here's the news: The biggest prime number yet has been discovered.

It is indeed massive, more than 17 million digits long. A text file of the entire number contains more than 22 megabytes of information.

There is no clear pattern in these numbers, nor is there an easy formula to calculate the 11th prime number (31). And, as proven by the great mathematician Euclid, around 300 B.C., there are an infinite number of primes.

That means there are unfathomably large numbers that are prime. The newest find is 2 to the power of 57,885,161 minus 1. That means 2, multiplied by 2 more than 57 million times, minus 1. Don't try this on any ordinary calculator.

The lucky number-hunter who came upon it is Curtis Cooper of the Great Internet Mersenne Prime Search (GIMPS), a collaborative project involving thousands of volunteers who sift through numbers in search of primes.

Cooper, a professor at the University of Central Missouri, used his computer to identify the number through software developed by George Woltman, in Orlando, Florida, and the PrimeNet system written by Scott Kurowski, in San Diego, California.

The achievement was no easy task: According to GIMPS, it took 39 days of nonstop computing to prove the prime number is indeed prime.

This is the third time that Cooper and his university have uncovered a record prime number, according to GIMPS.

Prime-number hunters do get to reap some rewards. The new number is eligible for a $3,000 prize from GIMPS. There's more money in even bigger numbers, though: The Electronic Frontier Foundation offers a cool $250,000 to the first individual or group that snags a prime number of at least 1 billion digits. Neither of these purses is prime.

The particular kind of prime number that GIMPS collaborators look for is called a Mersenne prime, named after the French monk Marin Mersenne. The formula named after him is 2 to the power of "p" minus 1, where "p" is a prime number. This doesn't always yield a prime, but the result has a greater chance of being prime, and it's easier to verify whether it's prime.

Searching for prime numbers is sort of like looking for needles in haystacks, says Jordan Ellenberg, professor of mathematics at the University of Wisconsin. The Mersenne prime formula acts as a guide to a haystack showing where more needles (primes) are likely to be, so it's easier to tell where the needles are.

What relevance does the largest prime ever have on your life? Probably none. Although prime numbers are useful in cryptography, a field that studies ways to make communications and information secure, it's not as though cryptographers are running out of prime numbers already, Ellenberg said.

But it's an achievement in the sense that it shows modern computers are powerful and fast enough to run these calculations and processes, Ellenberg said.

"In some ways, this is more of triumph of engineering than a triumph of mathematics," he said.