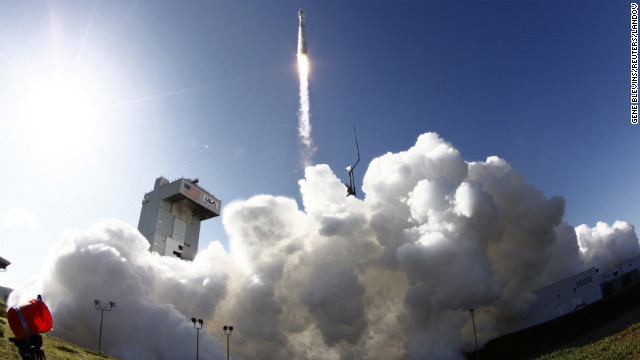 An Atlas-V rocket carrying a Landsat satellite lifts off Monday at Vandenberg Air Force Base, California.
February 12th, 2013
11:58 AM ET

NASA put its newest Landsat satellite into orbit on Monday, extending a long-running program that has been beaming back dramatic images of Earth for more than 40 years.

The Landsat Data Continuity Mission - to be designated Landsat 8, once it's up and running - lifted off from California's Vandenberg Air Force Base atop an Atlas V booster.

The $855 million platform, about the size of a sport-utility vehicle, has been in the works for years amid concerns about maintaining the U.S. suite of geoscience satellites.

NASA's Mars rover driver Scott Maxwell shared all kinds of amazing things about himself when we last spoke in August. He’s a cancer survivor, for one. And his father was a railroad engineer, passionate about driving trains, while Maxwell himself has been enthusiastically controlling vehicles on Mars since 2004.

“This is the kind of thing that I, as a kid, grew up dreaming about doing, and I have been unbelievably lucky to be able to do this with part of my life,” Maxwell told me.

Given how much he loves working on Mars missions, it was shocking when he revealed on social media that he would be leaving NASA for Google.

“It’s a lot like when my 15-year marriage broke up: JPL and I have grown in different directions, and I’m not a good fit there anymore,” he wrote on Google+. His last day at the Jet Propulsion Laboratory was Friday.