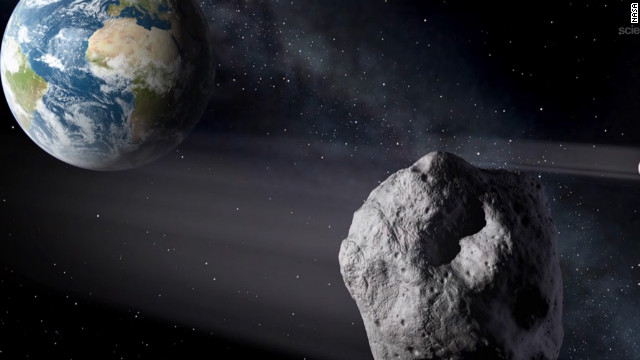 The flyby was the closest ever predicted for an object this large, according to NASA.  The asteroid, called 2012 DA14, flew between Earth and the satellites that ring the planet 22,200 miles up.

NASA says the asteroid is entirely unrelated to the meteor that exploded over Russia Friday.

Check back for live updates beginning at 2 p.m.

2:25 p.m. We survived! The asteroid has passed its closest approach, and is now heading away from Earth.

2:24 p.m. Paul Chodas is back. He says the orbit will shrink a little. It could make a close approach again in the year 2046. We can predict its path through most of the 21st century, he says.

The asteroid appears to rotate about once every six hours, he says. "It's conceivable that it could be somewhat larger or smaller" than the estimate of 150 feet. He'll be heading out in about an hour to get more data about this space rock.

2:14 p.m. A visualization tool called Eyes on the Solar System uses data on DA14 to track the asteroid in real time. You can visit this website to look around the entire solar system in an interactive way, including the asteroid.

2:10 p.m. Talking about the Russian meteor: The two events are unrelated. "It's simply a coincidence" that they happened to come near the Earth on the same day.

An amateur group in Spain spotted the 2012 DA14 asteroid. NASA-funded surveys have found 95% of near-Earth objects.

The Gingin observatory is observing the streaking of the asteroid. It's amazing how bright the asteroid is on its approach, says Paul Chodas of the Near Earth Object team. The reason it streaks: It moves during the time exposure of the telescope, he says.

Auriol Heary at the Gingin Observatory in Australia says there are very clear skies. "The Milky Way is so clear you can almost touch it."

2:04 p.m. If you're in Eastern Europe, Asia or Australia, you could see this object with binoculars or a telescope, says NASA's Don Yeomans, who gave CNN a Science Seat interview this week.

2 p.m. NASA says we know the closest approach of this asteroid will be about 2:25 p.m., but "closest approach" takes hours. From that point on, it will be flying away from the planet. NASA is showing images, both from hobbyists in Australia.

The Gingin Observatory, near the town of Perth, Australia, on the Western side, is capturing a great view of the asteroid moving.