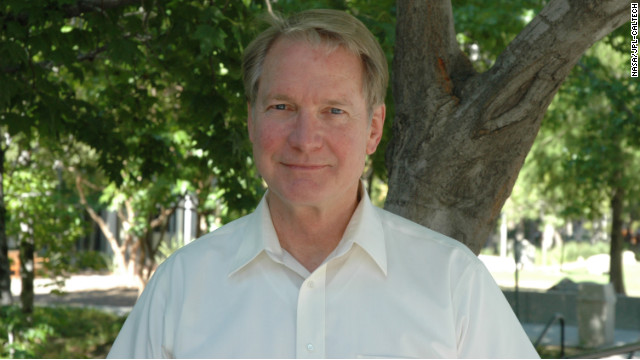 CNN: What made you want to get into astronomy?

Yeomans: I had a particularly engaging science teacher at Middlebury College in Vermont and he turned me on to astronomy and I decided to go to grad school at the University of Maryland as a result. The topic of comets and asteroids appealed to me so I zeroed in on that and, in particular, their motions, where they are and where they’re going to be.

CNN: What’s a normal day at work for you?

Yeomans: My work day usually begins with a check of our automatic monitoring systems to see if any new near-Earth objects have been discovered and whether or not one of them will make a close Earth approach in the near future. We closely interact with the Minor Planet Center in Cambridge, Massachusetts, the radar astronomers and a small army of amateur and professional astronomers to make sure future close-Earth approaches of asteroids and comets are observed with as many techniques and tools as possible.

CNN: In addition to monitoring surrounding near-Earth objects for potential threats, why else is it important for us to know more about asteroids and comets?

Yeomans: Near-Earth objects are important for a number of reasons beyond the threat issue. They are the leftover bits and pieces from the solar system formation process so if we wish to understand the chemical and thermal environment under which our solar system formed 4.6 billion years ago, then we’d like to study near-Earth objects since they have not changed much since this formation process.

These objects likely brought to the early Earth much of the water and carbon-based materials that allowed life to form more than 3.5 billion years ago and subsequent impacts allowed only the most adaptable species - like mammals - to evolve further. We humans may well exist atop the food chain as a result of near-Earth objects.

Finally, near-Earth objects may one day provide the mineral and metal resources for interplanetary structures. In addition, water resources can be extracted from hydrated minerals in some asteroids. The water, in turn, can be broken down into oxygen and hydrogen, the most efficient form of rocket fuel.

One day, near-Earth objects may serve as the fueling stations and watering holes for interplanetary travel.

CNN: This Friday, your team has announced that a relatively large asteroid is going to pass quite close to Earth. Scientists are going to be ‘pinging’ it with radar - what do you hope to learn from observing this event?

Yeomans: [The asteroid] 2012 DA14 is approximately 45 meters in diameter and will pass within 17,200 miles above the Earth’s surface on Friday. Shortly after the close approach, the two planetary radars will observe this object to provide precise position and velocity information for orbit improvement. The radar data can also provide information on the asteroid’s rotation characteristics, its shape and size; and the radars can check for any small moons.

CNN: If you were to discover that a near-Earth object was going to or likely to make a significant impact - that is, cause significant damage or threaten human life - what would you do?

To my mind, the simplest, least complex and, hence, best technique for deflection would use an impacting massive spacecraft carried out well in advance of the predicted [Earth] impact. The impacting spacecraft would slightly alter the asteroid’s orbit period so that in 10 or 20 years or so when the asteroid was predicted to impact Earth, it would miss by a wide margin.

We actually had an Earth impact in October of 2008 when a 4-meter-sized asteroid, 2008 TC3, caused an air blast over northern Sudan. The object was discovered less than a day prior to impact. Thanks to many amateur and professional astronomers, hundreds of additional observations were provided and we worked hard to improve the orbit for this object.

Steve Chesley and Paul Chodas, from our office, provided very accurate predictions for the time and place of this impact, and NASA sent out announcements of this impending impact a few hours in advance of the impact itself. This announcement was sent to a number of agencies, as well as the White House.

CNN: You have a pretty accomplished career thus far. What still excites you about what you do every day?

Yeomans: Mother Nature keeps firing shots across Earth’s bow in the form of near-Earth objects, and that keeps my days busy. We often have to provide predictions, request additional observations and inform the public about each new object that will approach the Earth. For a few of these objects, we often cannot immediately rule out a future Earth impact until new observations are used to improve the object’s orbit.

Before NASA’s comprehensive program on near-Earth objects began in the mid-1990’s, we were blissfully unaware of the objects whizzing by the Earth. Now we are looking [at] and tracking these objects. The chances of our being taken by surprise has been reduced substantially.

There’s more to be done, of course, but NASA’s near-Earth object program has substantially reduced the risk from a strike by a near-Earth object. Now we know about most of the large near-Earth objects and we’ve determined that none of these known objects represent a near-term threat.

The field of near-Earth objects is such an interesting topic, from a number of points of view, that I always find this work exciting. I look forward to going “to work.”

CNN: What’s the next big achievement in space you’d like to see?

Photos: All about asteroids

CNN: What advice would you offer to aspiring scientists?

Yeomans: That’s an easy one. Find a topic that fascinates you, then pursue it with bulldog tenacity. That way, you’ll love your job and never have a single day of “work.” For myself, I can’t believe I’m being paid to have this much fun.