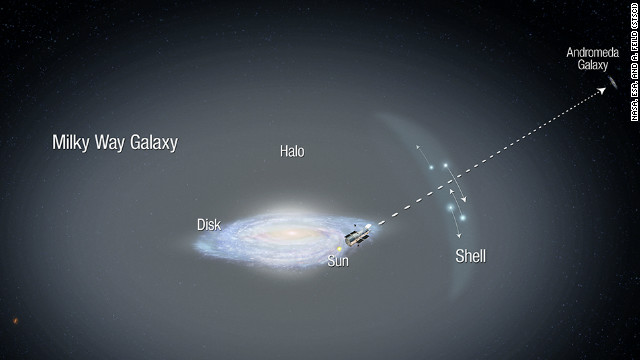 "So when that [Andromeda] study came out, I basically asked them for their contamination," said Alis Deason, the postdoctoral researcher who led the new study.

Deason and her team sifted through seven years of archival Hubble data to find the stars that others had thrown away. They hoped to identify remnants of a "galactic shell" - a structure seen around other galaxies that hints at a cannibalistic past.

"Basically, the halo is just a hodgepodge of stars that have come from other galaxies, usually dwarf galaxies," Deason said. "The reason these are interesting to study is they retain the memories of their initial conditions."

Ultimately, the team settled on 13 stars cruising along in the halo. That they existed there, along with thousands of other stars, wasn't the tip-off to their significance. Instead, their trajectories were what gave away their foreign past. Unlike other stars in the halo that move radially around the outer realm of the galaxy, these 13 stars appeared to hover.

"When we looked at these 13 stars, which are three times further away than it's ever been done, we found that the sideways motion was actually quite large," Deason said.

Their tangential motion hints that they were once part of another galaxy acquired by the Milky Way billions of years ago, like aimless minnows left behind after a whale swallows up the rest of the school.

"By looking at their velocities and their spatial positions, we can try to figure out what satellites these stars came from and when they came into the galaxy," Deason said. "It's a link to find out about the accretion history. That's why we study the halo."

These foreign stars will provide useful information about our own galaxy as well. Monitoring their movements, which are affected by the gravitational pull of our galaxy, could give us more accurate measurements about how massive our own galaxy really is.

Because most of the mass of our galaxy consists of dark matter - a mysterious form of matter that can't be seen - the dance of these straggling halo stars might hold the key to the big picture of our galaxy's composition.

Deason and her team stress that more hovering stars need to be pinpointed before our Milky Way's cannibalistic guilt is confirmed, but the existence of these 13 outliers hints at a halo of hidden clues about our galactic neighborhood's early days. Deason is hoping to acquire Hubble data from different fields and distances to ultimately rack up 600 to 700 halo stars for further study.

When the Milky Way and Andromeda cross paths someday, who knows whether own sun will get in line with the new galactic order or chart its own path in the halo, serving as an artifact for future astronomers?