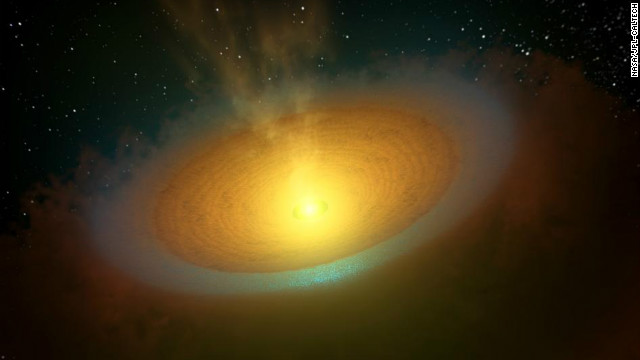 An artist's conception of a disk of dust and gas surrounding a young star. Such disks are the birthplaces of planets.
March 8th, 2013
07:30 AM ET

Science Seat: How to make a planet

Editor's note: The Science Seat is a feature in which CNN Light Years sits down with movers and shakers from different areas of scientific exploration. This is the fifth installment.

Sarah Dodson-Robinson is an assistant professor in the astronomy department at the University of Texas at Austin. She is a member of the American Astronomical Society and recently won the organization's Annie Jump Cannon Award for her work exploring how planets form.

Dodson-Robinson says she enjoys discovering new things and coming up with new pieces of knowledge, no matter how small. She describes it as a “wonderful feeling.”

CNN Light Years recently chatted with Dodson-Robinson about her research. Here is an edited transcript:

CNN: What is the main goal of your research program?

Sarah Dodson-Robinson: My main goal is to answer the question, “How do planets form?” I’m interested in almost any type of planet, but my work so far is best known for its focus on supergiant planets, which are much more massive than Jupiter. I also study stars that host planets in order to figure out what chemical elements are most important for forming planets. Lately I have been studying small stars, which may form in a similar way to large planets, in order to get insight into supergiant planets.

CNN: What is the importance of your research?

Dodson-Robinson: By studying planet formation, I help answer some of the most fundamental questions that confront humanity. Humans wouldn’t be here without planet Earth, but there was a time when Earth didn’t exist. It formed relatively recently in the history of the universe, only about 4.5 billion years ago. Earth isn’t alone, either - astronomers have discovered over 2,000 planets outside the solar system. Planets are everywhere in the galaxy, so it’s important that we understand how they grow.

CNN: Tell us about some of your results.

Dodson-Robinson: My best-known result is that supergiant planets on wide orbits must form by gravitational instability, which is the sudden collapse of a gas cloud in a disk orbiting a young star. That’s a very different process from how giant planets usually form, which is by sticking asteroid-like pieces of rock together till a massive solid core forms, then gravitationally attracting an atmosphere.

I also made a discovery that silicon is a particularly important element for forming planets, which we know because stars that have planets are rich in silicon. My hypothesis for why silicon is important, which my student, Erik Brugamyer, is testing, is that silicon is a limiting reagent in the formation of the tiny dust grains that are the first planetary building blocks. More silicon means more grains and more raw material for planet building.

CNN: How do you study planet and star formation?

Dodson-Robinson: I have several ways of doing it. For stars, my student and I are working on discovering new stars that formed by top-down collapse. We are looking for small dwarf stars orbiting large, giant stars. It’s a challenging observation to do since the giant star is so much brighter than the dwarf star. It’s like looking for a firefly in the glare of a big stadium lamp.

CNN: What tools do you use to conduct your study?

Dodson-Robinson: My tools are supercomputers, grids of connected desktop computers and telescopes. In my group, we do lots of computer programming, even the students who use telescopes. The general process is that we acquire data - either from a computer simulation or a telescope - then we sit down and write computer programs to analyze it.

CNN: So how does a planet form?

Dodson-Robinson: There are two ways of forming planets. In the first way, bottom-up growth, tiny grains of dust stick together to form pebbles, then the pebbles collapse into rubble piles under the force of gravity. The rubble piles are called planetesimals, and today’s asteroids and comets are leftovers from these early planetary building blocks. The planetesimals then begin to collide with each other and stick due to gravity, eventually becoming an Earth-size planet or even larger. If the forming planet reaches 10 Earth masses or more, it can attract an atmosphere of hydrogen and helium and become a giant planet. Jupiter and Saturn started in the same way as Earth, from sticking together tiny pieces of dust.

There’s a second way of forming planets, top-down collapse, where a cloud of gas orbiting the star spontaneously collapses. This type of planet formation is not very common, but it happens sometimes.

CNN: What interesting facts can you share with us about planet formation?

Dodson-Robinson: The first step in planet growth is forming tiny dust grains of about one millionth of a meter in size. Those tiny dust grains stick together electrostatically, which is a fancy word meaning they form dust bunnies. The same physical process that makes annoying dust bunnies under your bed is actually responsible for the growth of worlds.

I wanted to test (this hypothesis) because we don’t know how common these planetary behemoths are. It seems like they might be rare, and if they are, we want to know what’s inhibiting them from growing.

CNN: How did you come up with that hypothesis and why?

Dodson-Robinson: I was just thinking about how planets grow, and I wanted an explanation for why supergiant planets on wide orbits are so rare. The dust grains were a natural suspect since they stop heat from leaving the protostellar disk. In order for top-down collapse to occur, the disk has to get very cold.

CNN: You’ve made a lot of new scientific discoveries. Which one are you most proud of and why?

Dodson-Robinson: I discovered that silicon is a particularly important element for forming planets. If you look at the stars that have planets orbiting them, they are almost all rich in silicon. That was the first big discovery I made, so I’m very proud of it. I also helped discover that some supergiant planets formed by top-down collapse, rather than bottom-up growth. It was exciting to learn that the galaxy has at least two different ways of forming planets.

CNN: What are you working on now, and what should we expect from you in the near future?

Dodson-Robinson: Right now I am working on discovering stars that formed by top-down growth, the same way supergiant planets form. My preliminary research, with my student Kevin Gullikson, indicates that top-down growth is rare among stars, but so far we have only studied a small sample of stars. We’re working on putting together a bigger set of stars to study - 300 or so - to finally answer the question, how common is top-down star and planet growth?

CNN: How would you define 'planet'?

Dodson-Robinson: “What is a planet?” seems like it should be an easy question, but it’s not. The International Astronomical Union voted on the definition of a planet in 2006. It’s a spherical body that’s large enough to be the dynamically dominant member of its orbit (meaning it doesn’t share an orbit with other similar-size bodies), but small enough not to burn deuterium (heavy hydrogen) in its interior.

Since I study planet formation, I favor a slightly different definition. A planet is any dynamically dominant member of its orbit that grew from the bottom up, starting with dust grains colliding to form pebbles. If such an object gets large enough to burn deuterium (about 13 Jupiter masses), it should still be called a planet. Stars and brown dwarfs form from collapsing gas clouds or disks in quite a different process.

Are you involved in any volunteer work?

I made up an interactive activity called “Cassini Collage,” where I show pictures of Saturn and its moons taken by the Cassini spacecraft and the audience uses the pictures to figure out whether Saturn has seasons, why its icy moons have cracked surfaces and how Saturn’s rings are sculpted. I have done my Cassini Collage activity for UT’s first-year honor students and for a Unitarian fellowship. I have done other presentations about planets for student clubs and groups of retirees.

What advice would you give people interested in pursuing a degree in science?

There are lots of things you can do with a degree in science. It’s a good starting point for many different careers, a lot of which involve making new discoveries. If you want to keep on learning all your life, then being a scientist is a great career choice.