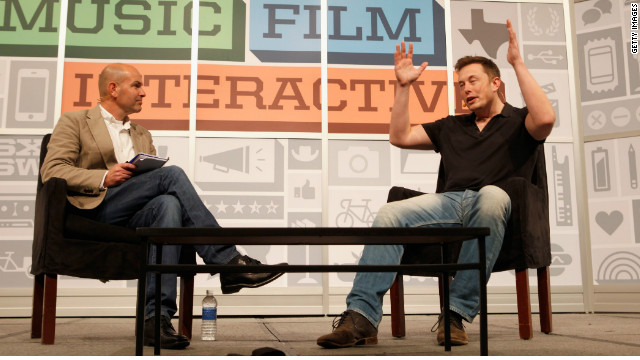 Elon Musk: Our future in space depends on reusable rockets

The future of space travel will depend on our ability to make rockets that can be used more than once, says SpaceX CEO Elon Musk. And on Saturday, he gave a crowd at the South by Southwest Interactive festival the world's first look at a step in that direction.

Musk, whose SpaceX Dragon is currently docked on the International Space Station, showed a packed exhibit hall a two-day-old video of Grasshopper, an experimental rocket. If fully realized, the rocket would propel spacecraft out of the earth's atmosphere, then flip around, sprout landing gear and return intact to the launch pad.

In the video, a 10-story-high Grasshopper rocket did just that - except for the leaving-the-atmosphere part. It blasted off, hovered, and then set itself down at virtually the same spot where it began. The video, with its Johnny Cash "Ring of Fire" soundtrack, drew cheers from the crowd.