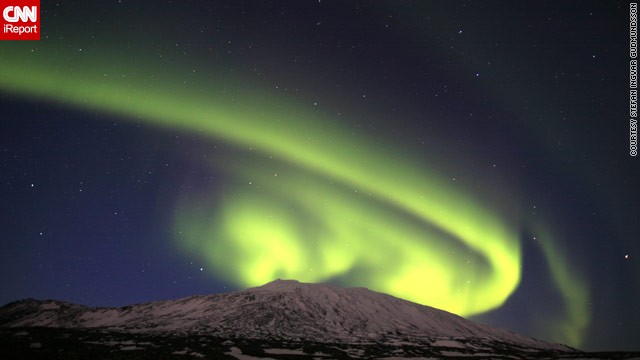 A spectacular solar event over the weekend provided a stunning showing of the northern lights, or aurora borealis. This image by Stefan Ingvar Gudmundsson from Iceland captures the lights appearing to curl around the Snaefellsjokull glacier.
March 19th, 2013
04:39 PM ET

They are one of nature's most spectacular sites: The aurora borealis, or northern lights as they are known, have captivated onlookers for thousands of years.

This past weekend saw a particularly stunning display following a phenomenon known as a coronal mass ejection, where the sun spews a burst of particles into space that reach Earth one to three days later.

Bursts toward earth can cause electromagnetic storms when they react with the Earth's magnetic field, resulting in an explosion of color in the sky.