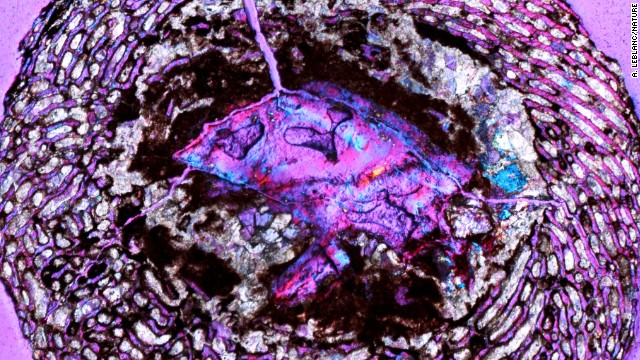 Scientists found these dinosaurs grew extremely fast in comparison to present-day living animals and even flexed their muscles while still in the egg.

"In other animals, about 15% to 45% of the embryo bone tissue is made up of these soft tissue cavities; in these dinosaur fossil samples, we found the cavities to make up roughly 60% of the bone tissue," Reisz said.

Scientists stumbled upon the embryos in China's Yunnan province in the city of Kunming, roughly 1,242 miles south of Beijing. It is known for being one of the world's oldest embryo preserves and a treasure trove for paleontology. The newly discovered embryonic dinosaur bone bed was nestled in the lowest, most richly fossilized region of the Lufeng Basin.

The remains were not found in one, comprehensive intact skeleton; rather they were from a cross-section of various fossilized embryos.

The bone fragments - some as small as pencil lead - were from sauropodomorphs, a group of dinosaurs known for their gigantic size, with some of these terrestrial vertebrate growing up to 9 meters (29.5 feet) in length.

To understand the significance of these embryonic fossils dating back 190 to 197 million years ago further, scientists from mainland China and Taiwan teamed up and called upon experts across multiple disciples and continents.

"We had paleontologists working hand in hand with chemists, physicists and geologists," Reisz said. "This is a breakthrough in how we approach dinosaur paleontology," adding that "this has never been done before."

Scientists used synchrotron radiation and highly advanced infrared spectroscopy to isolate the main bone crystallizing structure, from which they took uncontaminated samples. They examined the ossification, or bone growth patterns, of more than 200 fossilized embryonic bone fragments from a single species.

Reisz said he and his colleagues were excited about what the findings mean for paleontology but they have much more excavation work ahead to gain a more comprehensive understanding of the origin of dinosaurs.