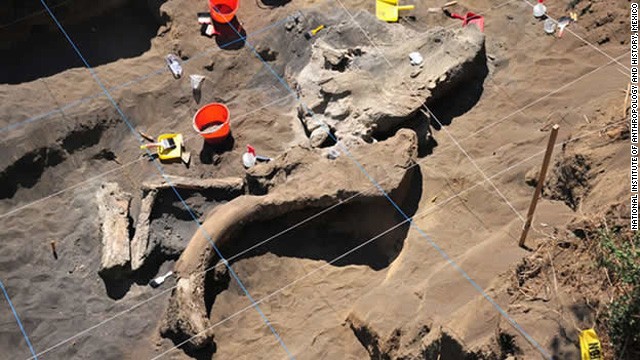 Researchers said that the specimen is a male Columbian mammoth (Mammuthus columbi) that died approximately 10,000 to 12,000 years ago. The animal was approximately 30 years old at the moment of its death. Its body remained covered by a one-meter thick grave of ashes in a gorge, where it fell during a volcano eruption.

This mammoth is one of the most complete that has been found in Mexico. According to Joaquin Arroyo, mammalian fauna specialist, parts of the bones, legs and canine teeth are usually what's found in the country.

The residents of Santa Ana Tlacotenco, a town in the southern, rural part of the city, discovered the molars of the animal by chance in 2012 in a sandy terrain covered by nopales, a type of cactus in that area. The discovery attracted the researchers, who suspected they might find the full body.

About a month after the excavation started, a sense of expectation has been hanging in the air. During the Holy Week festivities, about 100 people from nearby towns went to the site of the excavation to listen to the investigators’ explain the animal's anatomy.

Up to now, the paleontologists have been able to expose the tusks, parts of the skull and jawbone, as well as some ribs and vertebrae. The investigators are yet to find 30% of the bones, according to the group of scientists from the National Institute for Anthropology and History, the Anthropological Investigations Institute and the National Autonomous University of Mexico.

After the discovery of the fossils, residents of the area told the researchers that the owners of one house found another mammoth’s fossils 15 years ago, but they reburied them.

The National Institute for Anthropology and History said that they are exploring the possibility of restoring the fossils to be studied and later exposed in the town’s library or at the Milpa Alta Museum.

Mammoths are an extinct species in the elephant family that existed in the Pliocene and Holocene periods. They were 16 feet tall and weighed 10 tons. Their tusks were approximately 9 feet long and they used to live in grasslands and areas close to lakes.

In 2012, the fossil of another mammoth was discovered in Queretaro, a neighbor state to Mexico City.