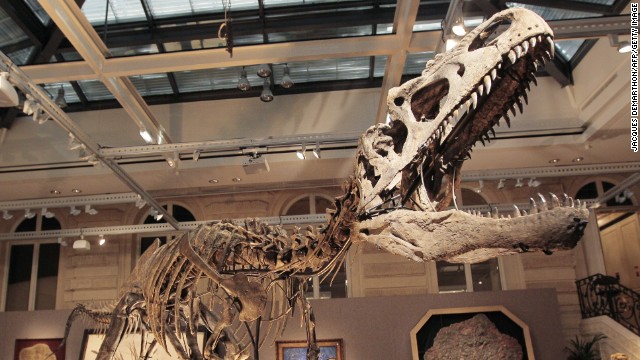 Scientists ran the information through a physics simulation program to see how the allosaurus ate its food.

While allosaurus used delicacy and precision in moving its bladed teeth to attack prey, the larger Tyrannosaurus rex was an impressive predator in a different way - it had a big head and massive neck and jaw muscles, Snively said.

"Tyrannosaurus rex was like a gorilla with an ice pick, just overwhelming force, whereas allosaurus was more like a surgeon with a scalpel," Snively said.

It seems that this dinosaur ate more like a falcon than a crocodile. Sniveley explained that a modern-day falcon called the American kestrel drives its beak downwards into the flesh of its prey, then rips up and back.

"Allosaurus had specialized neck muscles that made it really good at doing just that," he said.

The dinosaur would hook its head down, sink its teeth in, and tear up and back on the meat, he said.

Previous research showed that allosaurus was particularly good at eating like this. The new study advances the picture of what the dinosaur was capable of doing, Snively said.

Also building on earlier analyses, Snively and colleagues found that allosaurus must have had a "really weird neck muscle, that gave it really good leverage for driving its head and its teeth down into prey." They advanced this picture by showing just how good these muscles were at this style of feeding.

Additionally, the simulation showed that allosaurus's head was quite light, so the head could move very quickly. This would make the creature good at striking rapidly for smaller prey.

"Also, if an allosaurus was hangling with a dangerous prey, like stegasaurus, it could bite very quickly and wound the prey quickly without endangering itself so much," Snively said.

Allosaurus fed on giant long-necked plant-eating dinosaurs called sauropods, as evidenced by tooth marks on the bones of their remnants. It's unclear if allosaurus attacked them. It may have gone after the bony-plated stegosaurus, but it was probably good at catching smaller prey by whipping its head to the side.

Utah considers allosaurus, which could grow to about 16.5 feet in height and 39 feet in length, as its state fossil. The word means "different lizard."

The Big Al specimen has been studied extensively for its feeding mechanics, as well as injury, Snively said. A separate analysis showed that this particular animal had injuries to its ribs and feet, indicating it may have gotten into some scuffles.

"This particular dinosaur lived a pretty rough life. We don't know if it got that from defending itself, or from attacking prey, but we do know that it had several injuries that healed," Snively said.

In this line of research, the next step is to simulate how modern birds and crocodilians feed, to make sure the scientists' approach works for modern animals, and then see how it applies to other dinosaurs, such as Tyrannosaurus rex.