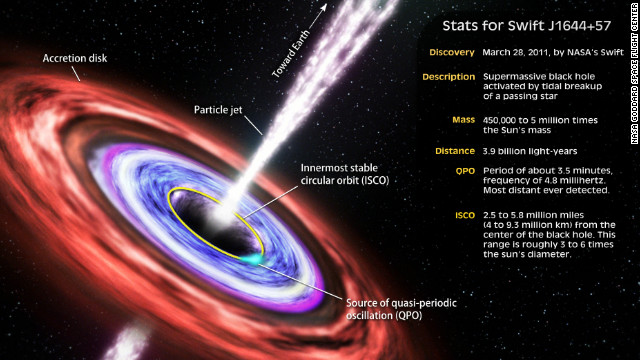 The sound of a dying star

(CNN) – Think of this: you’re an astronomer, and you and your team have detected, for the first time, a star being devoured by a supermassive black hole almost four billion light years away.

This is the first time astronomers have captured this drama happening so long ago – and so far away – with a black hole this large.

So, you’re the astronomer – and your team sees this by scanning and crunching a pile of numbers.

(The numbers represent the signals captured by NASA’s SWIFT satellite and orbiting telescopes, and beamed down to Earth.)

Fine. But how do you get this across to the REST of us?

The astronomer we’re talking about is Jon Miller at the University of Michigan. He figured – what if we describe what it would SOUND like?

[2:43] “Sound doesn’t travel in space, unfortunately. But Star Wars wouldn’t have been much fun if things blew up silently, right?”

So he and his team translated the frequency of the signals they captured in all those numbers into a sound. Listen to find out how.

Listen to this story at CNN Radio's Soundwaves