After a very eventful March, April was fairly quiet in terms of solar activity. But with the arrival of a new sunspot region on the Earth side of the sun, solar activity could begin to heat up once again in May.

Researchers at NASA’s Solar Dynamics Laboratory called this new region a “monster sunspot.” This region, labeled AR 1476, is gigantic in terms of sunspot regions: It measures about 60,000 miles across.

Sunspots are temporary phenomena on the sun that appear darker than surrounding regions and are caused by intense magnetic activity. Most solar flares and coronal mass ejections originate in sunspot regions.

END_OF_DOCUMENT_TOKEN_TO_BE_REPLACED 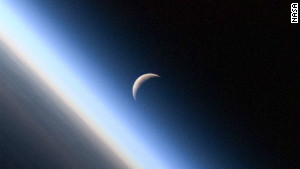 Earthshine may help yield clues to life on other planets

Did you ever look up at the sky on a clear night during a crescent moon and see the faint outline of the "dark" side of the moon?

What you are actually seeing is the reflection of the Earth’s light on the surface of the moon. The part of the moon you are observing really isn’t the dark side, or you wouldn’t be able to see it. Scientists call this reflection “earthshine.” They are studying the characteristics of this faint light to see if it could someday be used to determine the atmospheric and surface compositions of Earthlike planets outside the solar system (exoplanets), and whether these distant planets could host life.

A group of scientists led by Michael Sterzik at the European Southern Observatory are using the Focal Reducer/Low-dispersion Spectrograph (FORS) mounted on the Very Large Telescope in Chile to study the characteristics of earthshine. These characteristics are being used to create theoretical models that could identify Earthlike exoplanets harboring life.

Previous techniques have used the light bouncing back from exoplanets to determine the makeup of their atmospheres. However, these observations need to be fine-tuned in order to determine whether life exists on these planets.

The new technique used by Sterzik uses a property of light called polarization. Polarization tells scientists not only how bright an object appears, but also measures the shifting rotation of electromagnetic waves. Light reflected by surfaces such as water, land, or vegetation is polarized. This polarized light can be used to determine the characteristics of a reflecting surface. In the case of the reflected light called earthshine, it tells us the properties of Earth’s atmosphere and surface, Sterzik explains.

So how will these observations be used to determine if life exists on exoplanets? That’s where biosignatures come in. A biosignature is any substance such as an element, isotope, molecule or phenomenon that provides scientific evidence of past or present life.

When scientists look through their telescopes, they do not expect to see intelligent forms of life. However, they can detect gases such as oxygen, ozone, methane and carbon dioxide. These gases can occur without the presence of life. However, an abundance of these gases existing individually alongside each other could indicate the existence of life. If life isn’t present, these gases would react and combine with one another.

Current techniques only provide a rough characterization of giant exoplanets using today’s instrumentation and telescopes. Detecting water and oxygen in exoplanets is currently out of reach, and new telescopes and sensors will be needed to directly observe the characteristics of an exoplanet’s atmosphere.

In the meantime, scientists will continue explore earthshine in order to fine-tune theoretical models that could one day be used to determine if life is present on other planets. 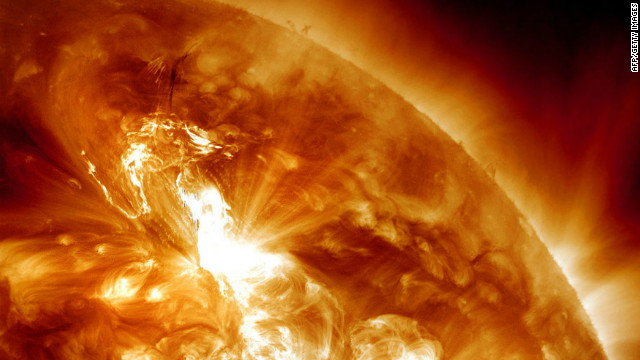 END_OF_DOCUMENT_TOKEN_TO_BE_REPLACED

Asteroid to pass closer to Earth than the moon

An aircraft carrier-sized asteroid, a little over four football fields in diameter, is heading toward Earth and it will pass closer to our planet than the moon.

NASA has classified the asteroid as a “potentially hazardous object” and it will pass to within .8 lunar distances on November 8.  It is the closest approach to Earth of an object this size in over 30 years.

What would happen if an asteroid this size crashed into Earth?

It would result in a 4,000 megaton blast, magnitude 7.0 earthquake and - if it falls into the ocean - could cause a 70-foot high tsunami within 60 miles of the crash site, according to an expert at Purdue University.

However, this space rock poses no threat of an Earth collision for at least the next 100 years, according to NASA’s Near Earth Object Program.

So what’s the big deal?

Encounters of objects this large this close to our planet won't happen again until the year 2028 when an asteroid will pass near Earth to within .6 lunar distances.

Scientists plan to reconstruct the shape of the asteroid with a resolution as fine as 13 feet (4 meters) using the antennas. Several days of high resolution operations are also scheduled at the Arecibo Observatory in Puerto Rico.

It will also provide a rare opportunity for amateur astronomers to directly observe an asteroid with optical telescopes.

The asteroid will approach Earth from a sunward direction and it will be a daylight object until the time of its closest approach on November 8.  The best time to see the asteroid will be after the hours of 4 pm EST (21:00 UTC).